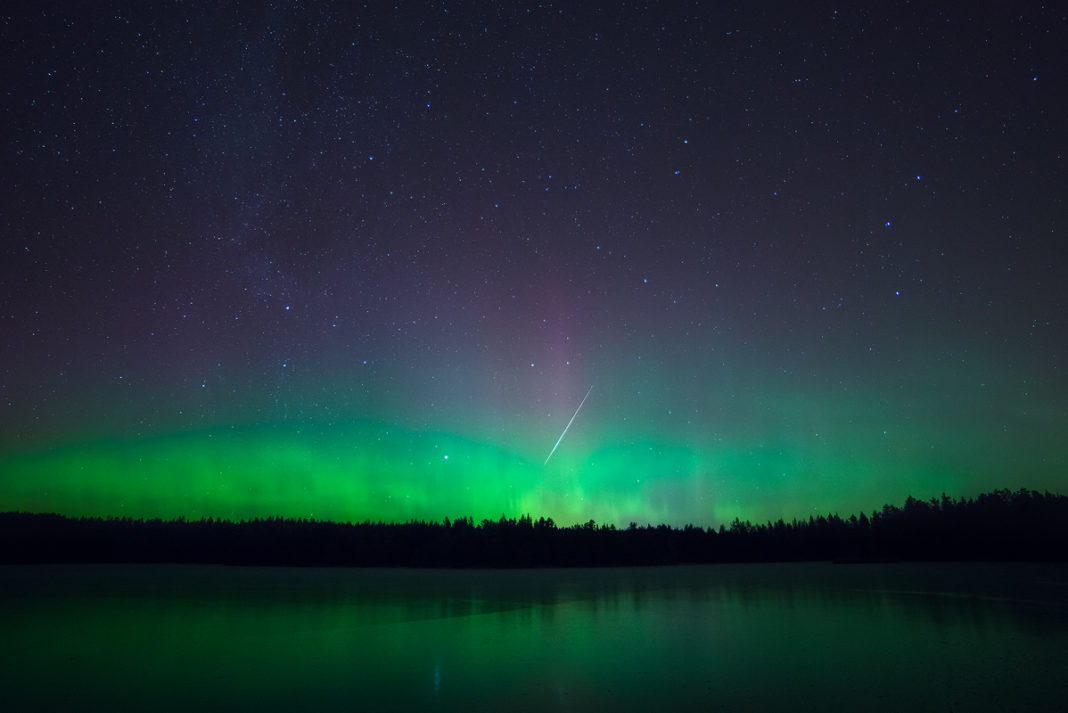 Photographing stars and the night sky is completely different than photographing during regular daylight or even the Golden Hour. Most of the techniques and guidelines you’ve learned to follow for “standard” landscape photography don’t apply for nighttime photography, which makes it a hard genre to enter when you’re new to photography – even more experienced daytime photographers can feel out of place during the night. However, when you’re first able to capture images of the stars, the chances are that you’ll get hooked!

After reading this article, you’ll have a much greater understanding of how you can go out and capture beautiful images of the night sky. You’ll be introduced to the ideal camera settings, recommended camera gear, how to focus, compositional guidelines and a few secrets on how you can photograph stars like a pro.

If you’ve followed this, and other, websites and regularly read their content, you might have picked up that the optimal settings for landscape photography involve the lowest ISO possible and an aperture between f/7.1 and f/13 (though this may vary depending on your subject). For night photography, however, these settings will either result in a black image or require a shutter speed of hours. 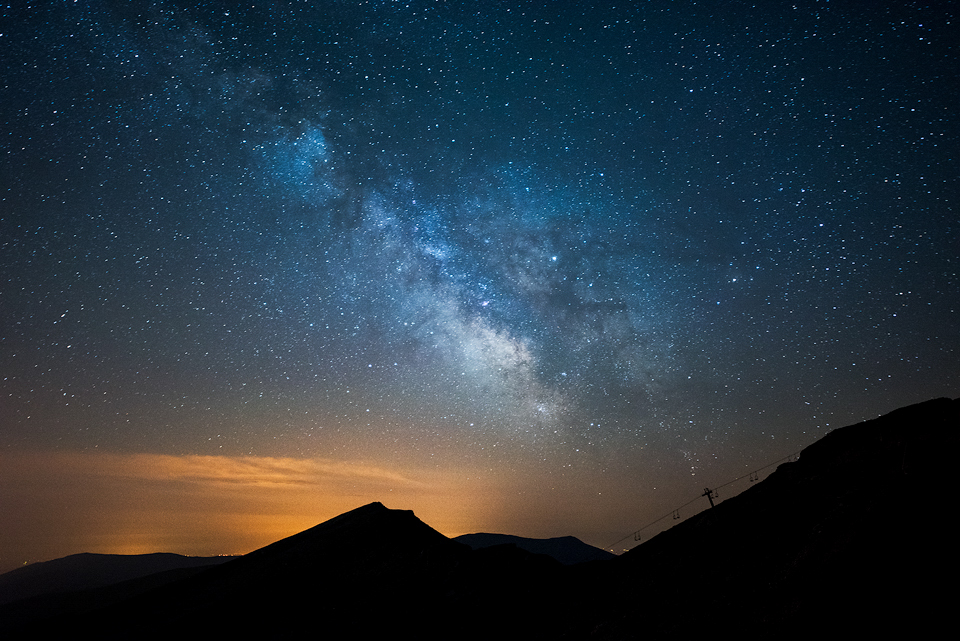 Since it’s most likely completely dark when photographing the night sky, it takes a longer period of time for the correct amount of light to reach the camera’s sensor in order to capture a well-exposed photograph. This means that you either need to use a large aperture, high ISO or slow shutter speed – or a combination of the three.

To capture as many details as possible in the sky, the best aperture for night photography is as open as possible. This means that if your maximum aperture is f/4 – you should use this. If it’s f/2.8 – that’s even better!

Using an open aperture means that there’s more light getting through the lens and reaching the sensor, allowing you to use a slower shutter speed or lower ISO than you otherwise would have needed. The amount of details you’re able to capture with an aperture such as f/2.8 is incredible and once you correctly capture an image of the night sky – you’ll be blown away.

You can use apertures such as f/8 when photographing the night sky but this requires a much longer shutter speed, which results in what’s known as star trails (I’ll come back to this later in the article).

During daytime landscape photography the ideal ISO is always the lowest number possible. A higher ISO introduces a significant amount of noise to the image which eventually has the power to make an image “useless”, which is why we always strive to keep it as low as possible. 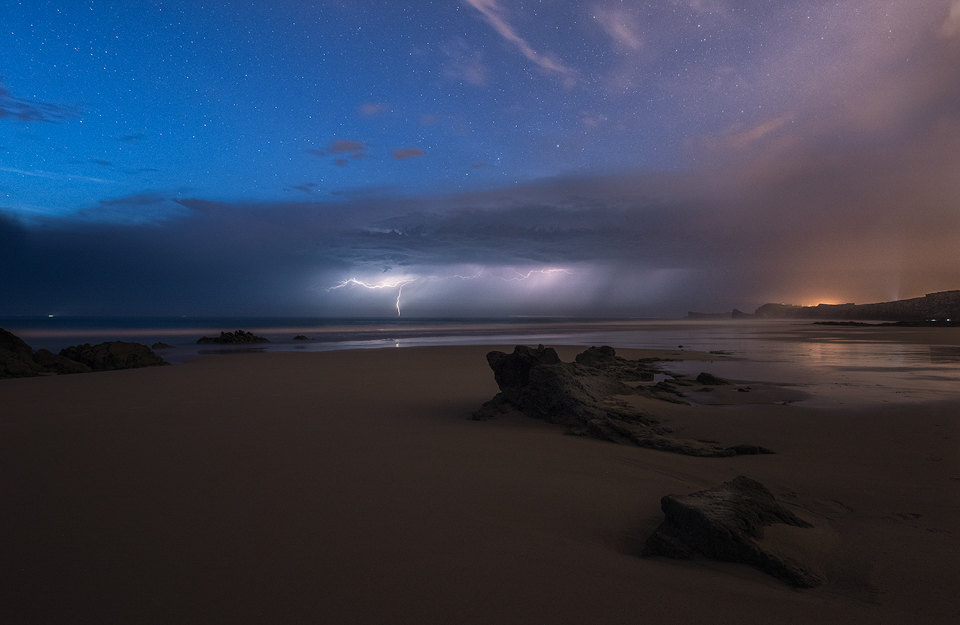 This doesn’t quite work for night photography. Since there’s a lack of light, we need to increase the shutter speed more than what you might feel comfortable with. Depending on how dark the night is, this typically is somewhere between ISO1600 and ISO3200, but on particularly dark nights, you might find yourself using an ISO above 6000.

While the shutter speed is a little more flexible, you need to be aware of the “consequences” when using an either too short or too long exposure time.

Using a short exposure means that you need to increase the ISO and introduce more noise than necessary. Despite the stars being sharp and not having any visible motion, entry-level cameras will have a hard time handling this amount of noise and you’ll soon see that it becomes too distracting. 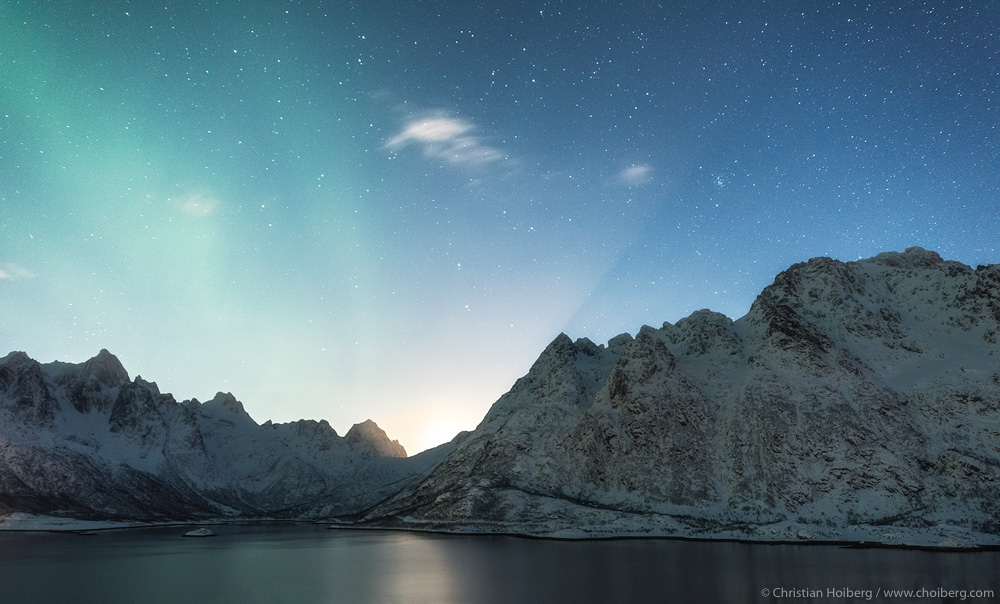 On the opposite side, a shutter speed above 30 seconds leads to the stars beginning to be slightly blurry. Due to the rotation of the earth, it doesn’t take much more than 30 seconds before you start noticing a small amount of motion in the stars. For most lenses, 30 to 45 seconds will be ok but even this is pushing the limit if you want razor-sharp images.

To be quite honest, there isn’t any equipment that you need only for night time photography. The required equipment for photographing stars is more or less the same as what I recommend using for landscape photography in general.

Since you’re capturing images with a shutter speed of multiple seconds, you need to use a tripod in order to maintain sharpness. You’re simply not able to hold the camera completely still for 15 seconds without any movement. Using a tripod lets you use a shutter speed of minutes, or even hours, without having to worry about camera shake and blurry images.

Using a remote shutter isn’t essential when photographing stars but I recommend having one as it might come in handy. If you choose to use an exposure of more than 30 seconds, you have to use Bulb mode and in that case, you may depend on a remote shutter. This doesn’t have to be anything expensive; a simple remote shutter will do the job.

Focusing in the Dark

Focusing is what many novice photographers find to be the most challenging about night photography. The lens’s autofocus struggles and it’s likely that you’ve ended up with more than one completely blurry image and perhaps even given up since you can’t get an in-focus image.

Luckily, it’s not as hard to focus in the dark as you might fear. The easiest way of getting a focused image at night is to switch your camera’s focus mode to manual and twist the focus ring to infinity. Take a test shot and, if needed, fine tune the focus until it’s correct. It might be a good idea to mark this spot by using a piece of tape or use a marker and draw a line – this makes it easy for you to find the sharpest focus again at any time.

The second option is to look for any distant light sources within your frame. Use Live View to zoom in on this spot and twist the focus ring until the light seems to be at its sharpest. Again, take a test shot to see if you need further refining.

Those of you who live in large cities are most likely not used to looking up at the sky and seeing millions of stars. In areas with dense population, the light pollution is significant which reduces our visibility of the crisp night sky – instead, there’s an orange haze, which is far less photogenic.

In order to capture a crisp and detailed night sky, you need to get as far away from light pollution as possible. Even just getting to an open field outside the town is better than staying in the middle of the city center. 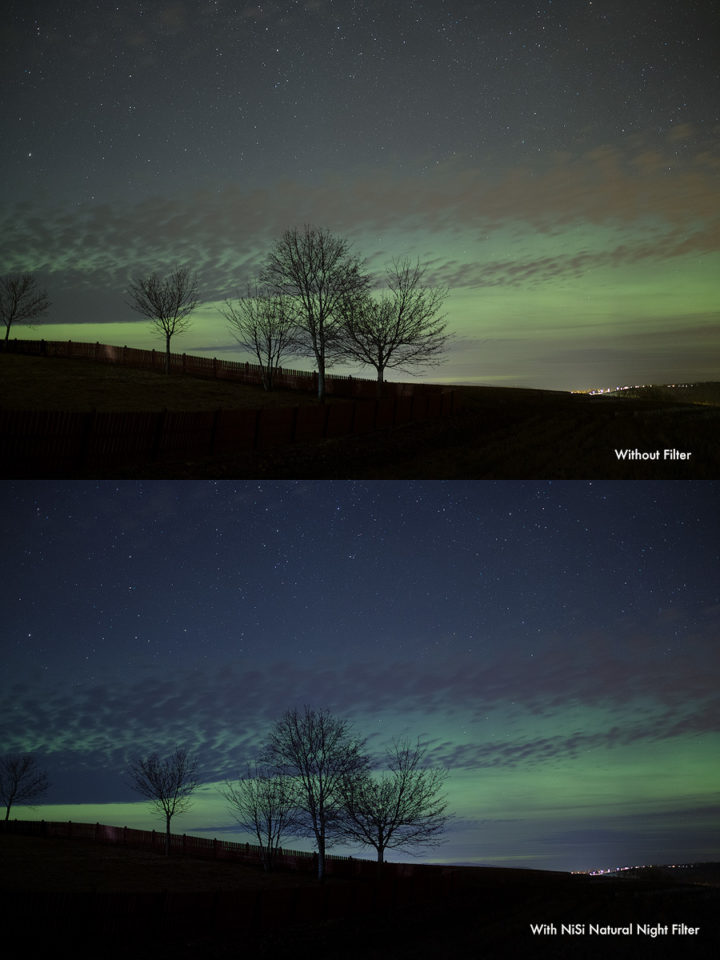 There are two ways to work around the light pollution and combining the two techniques can result in impressive images even close to cities.

The most common mistake I see amongst beginning photographers who go out to shoot the night sky is that they become so fascinated by the stars that they forget about the composition. A sky full of stars is beautiful but the image still needs more than just a sky over a random, unplanned subject. 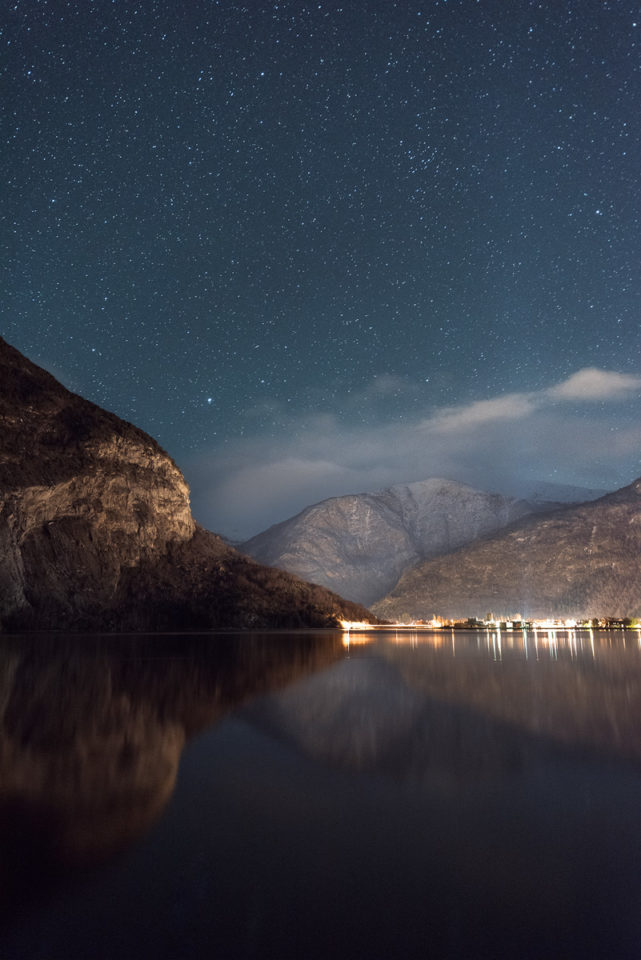 Treat the image just as you would if you were photographing during daytime; analyze the scene, set up a composition and aim to make the image easy to view for the viewer. Try this: look at some of your favorite images captured during the night. Do they have other elements than the sky? How much of the frame does the sky fill? Most likely, the sky is just a part of the image. There’s still a foreground and lines that lead to the main subject – the sky is just part of what makes the image that beautiful.

When talking about the shutter speed, I briefly mentioned something called star trails. This is an effect when you see the actual movement of the stars (due to the earth’s rotation) as lines dragged across the sky but we’ll come back to this further on in the article. 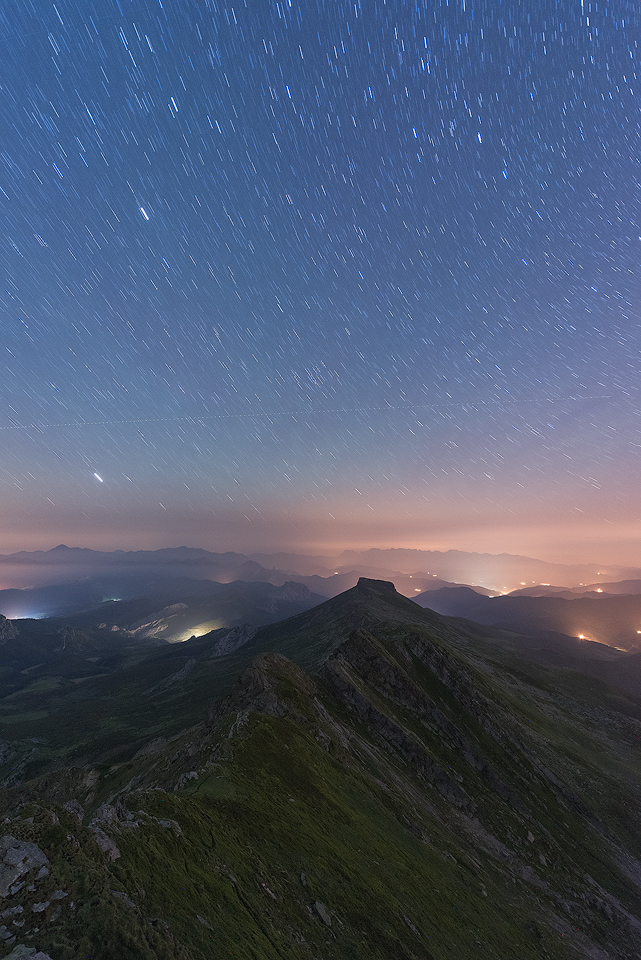 In order to achieve longer exposures than 15-25 seconds during the night, you can lower the exposure and use a narrower aperture. For example, you can aim for an ISO of 400 and aperture of f/8 – adjust the shutter speed accordingly and you’ll most likely have a nice star trail when you’re done.

Another tricky part of photographing stars is that the foreground is often much darker than the sky. Normally, a Graduated ND Filter would be the solution but in this case, that would mean using a longer exposure or increasing the ISO a significant amount. In other words, it’s not ideal.

Take the two exposures into Photoshop and by using Layers, blend them together. You’re now left with an image that has both a well-exposed foreground and sky. It might sound a little tricky but after trying this a couple times you’ll have the hang of it.

Certain top-level cameras have a very good Dynamic Range which means that instead of blending the two images, you can capture only one and increase the shadows/darks in Lightroom or a RAW editor – still, for the optimal quality, it’s better to capture two separate shots. 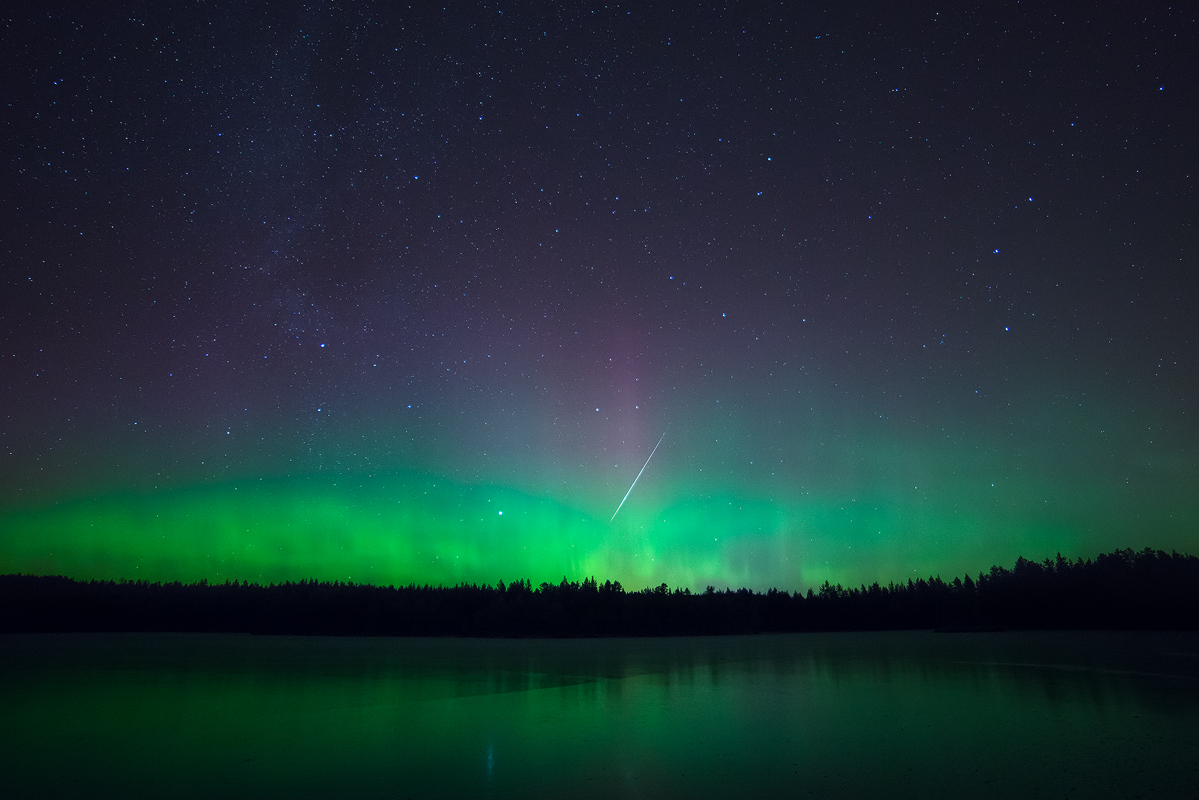