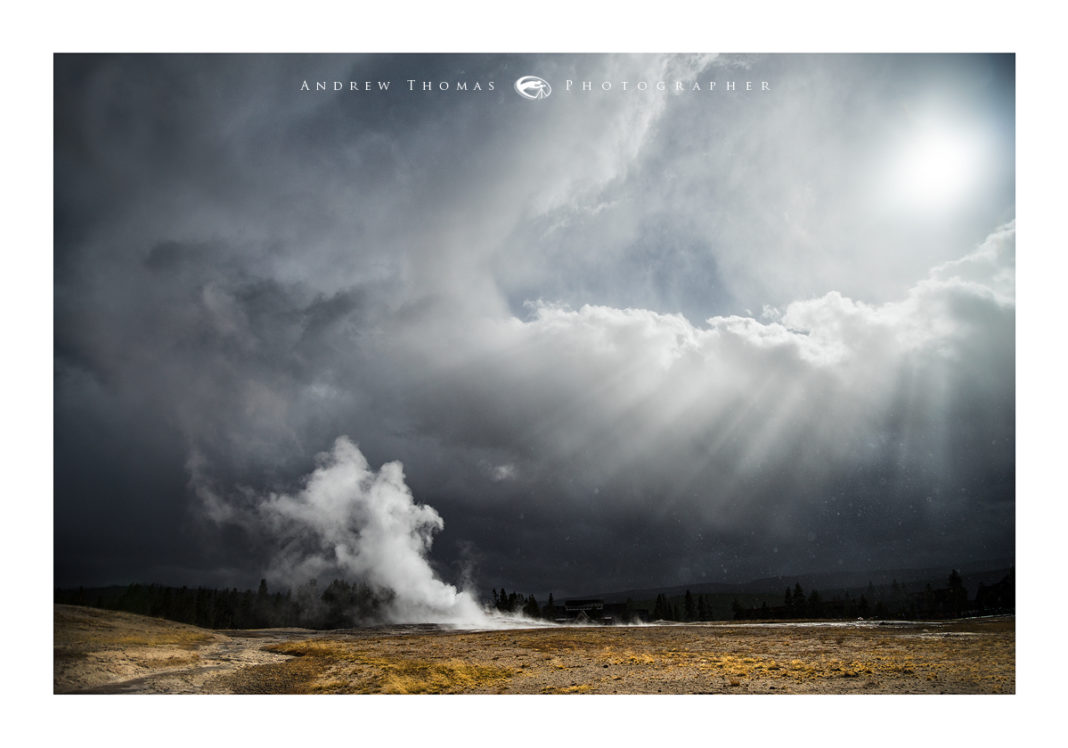 While browsing through the #CaptureLandscapes hashtag on Instagram in search of a new image to feature, there was one image that made me stop and awkwardly whisper wow to myself. The image is of the Old Faithful Geyser in Yellowstone National Park and is captured by Australian photographer Andrew Thomas.

The Old Faithful Geyser is the most crowded location in all of Yellowstone National Park and there are many beautiful images of it but this one sticks out – not only is it captured technically perfect but the conditions themselves are enough to make any landscape photographer jealous. 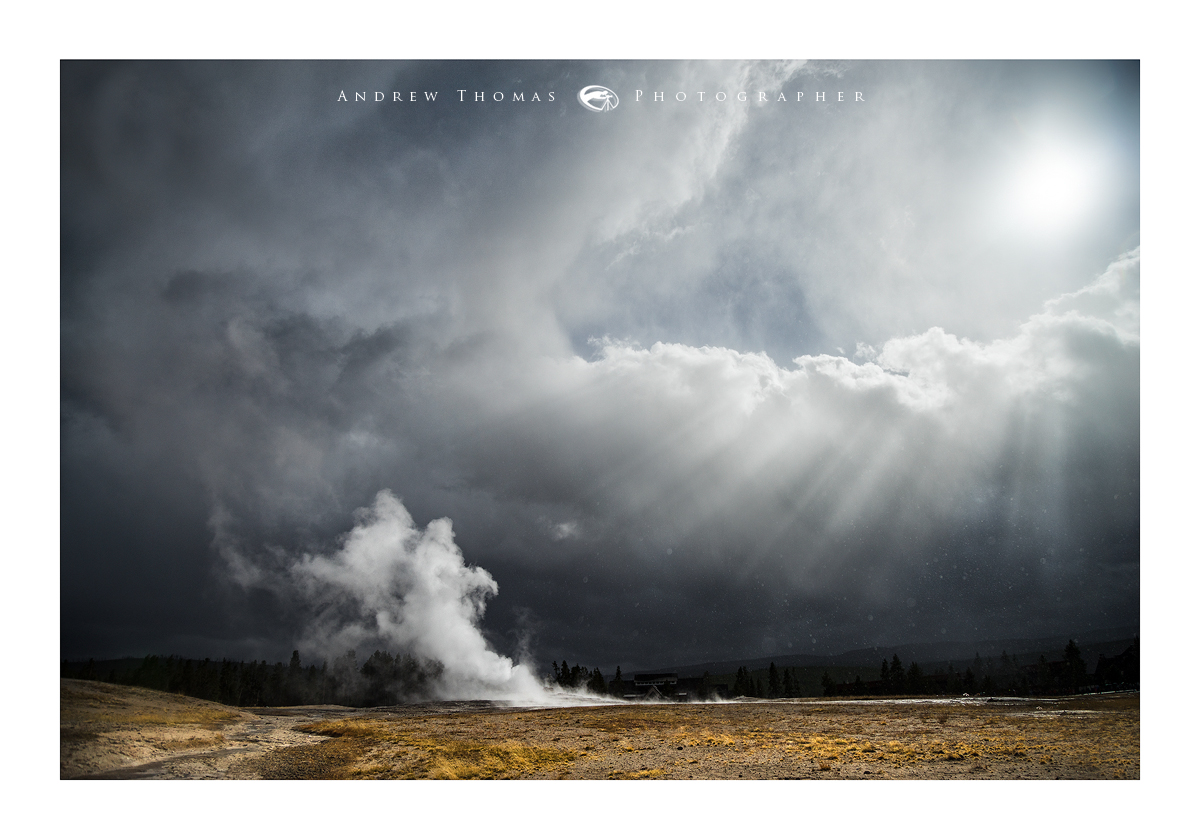 – Old Faithful erupts every 70 minutes or so, and we had just watched it do its thing and we’re moving on when the light, which had been great anyway, opened up even more. At the time it was still raining (that’s all the white dots to the right of the geyser), says Andrew Thomas about his image.

– With light like this all around, you have to move fast to make the most of it!

Were there any challenges with capturing the image?

– Actually, on this day I was very sick. I had a very bad cold and that morning we had done a 10km hike to a lake that turned out to be a disappointing location and had left me pretty exhausted. After this, we drove back to the Old Faithful area and my partner Debbie left me in the car for a rest whilst she went off to explore a bit further. This is a very touristy part of the park and the crowds can be huge. Maybe an hour later she came back and we decided we would spend some more time looking around as there are many more geysers in this part of the park. Also, the conditions had really developed to get me excited. So we waited to see Old Faithful erupt and then headed over to find Grand Geyser around 20-30 minutes walk; it was here that I captured my all time favorite USA National Park image! 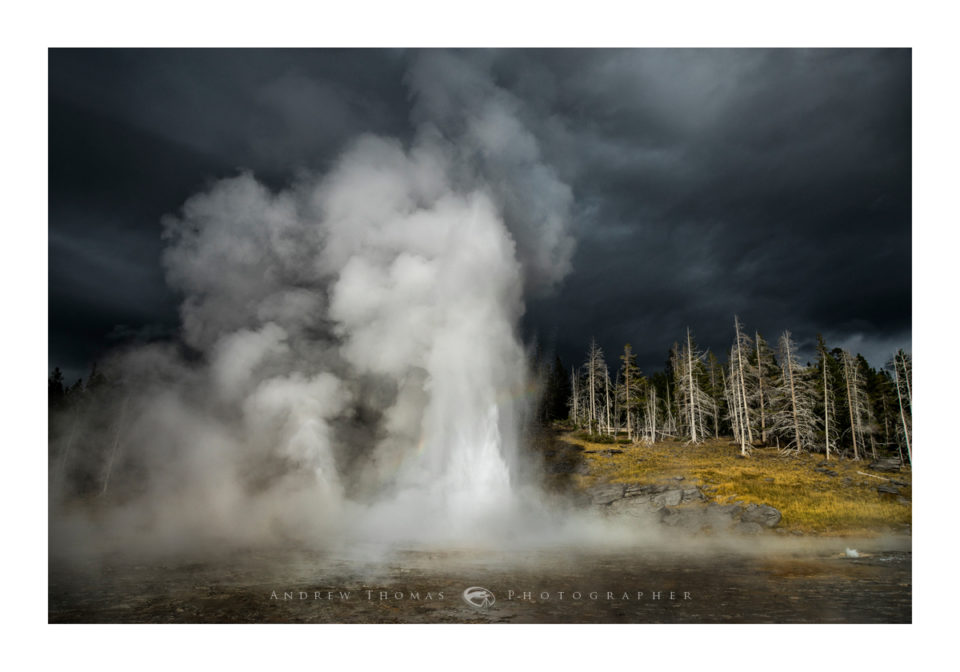 Despite photographing an extremely popular part of the Yellowstone National Park, Andrew points out that you don’t always need to get off the beaten track in order to capture something extraordinary.

– One of the things I love about these images is that they were taken in areas of the park that see thousands of visitors and it can be hard to find something unique. Like most landscape photographers I like getting off the beaten track and away from the crowds. However, I think these show that you can still capture extraordinary images right in the middle of all the people and touristy stuff – especially when the light is this good!

A Visit to All 59 National Parks in the USA

Andrew Thomas is no stranger in the USA National Parks. During a period of 9 years he visited the US a total of 18 times and he managed to visit all 59 National Parks during this period; which led to the creation of his published book The National Parks of the United States.

– In December 2007, Debbie and I made our first trip to the United States. It had nothing to do with photography but in order for me to run the Death Valley marathon. However, I was so taken with the landscapes of places such as Zion, Bryce, Grand Canyon and Monument Valley that I started using the still image function on the brand new high definition video camera I bought for the trip (a huge 3.2 megapixel…!) I had done a little landscape photography in Victoria back when I was around 20 (I’m 58 now), mainly black and white landscapes, that had been long forgotten. We had such a good time during our first visit that we returned again 6 months later and we’ve continued to return every 6 months or so.

– By the 4th trip, my photography had got to the stage where I had my first DSLR and we came up with the idea of visiting all the 59 USA National Parks. It wasn’t til we were long into the quest that any idea of a book started to develop. I have been a graphic designer for many years and was able to design the book and I had an almost finished product to show the publishers I reached out to. In early January 2016, I received an email from a publisher in Canada who wanted to take on the book and it was later released on August 9 2016 to coincide with the Centennial celebrations.