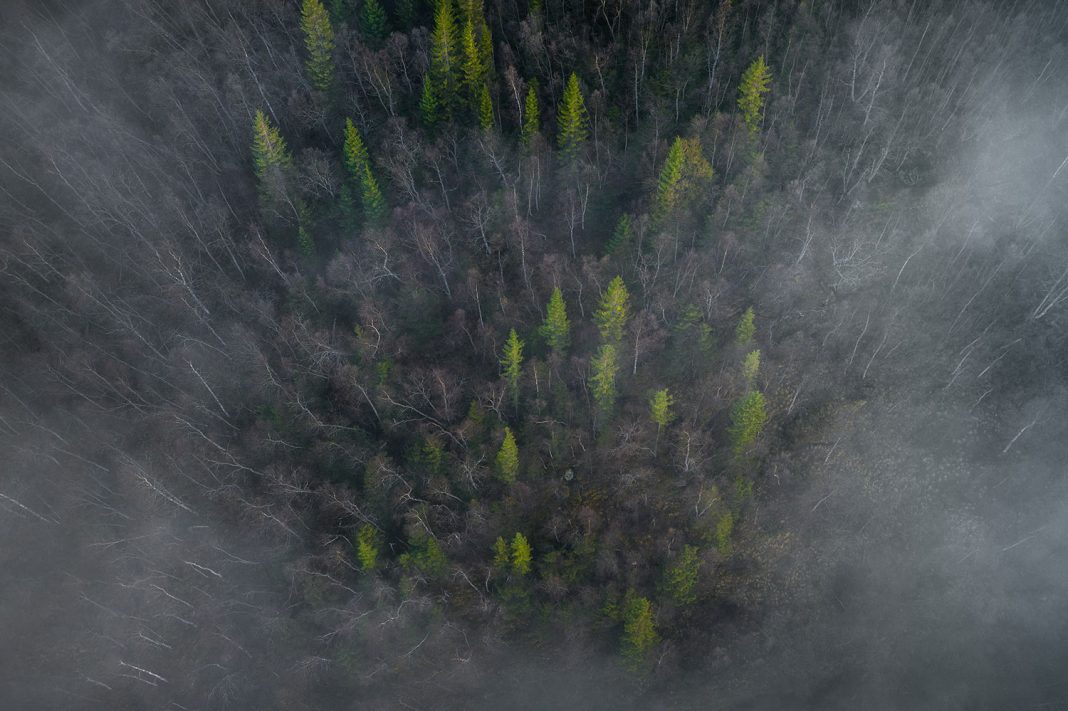 We’ve all seen stunning images captured from above but those who own a drone know that getting good results is more difficult than it looks.

Nailing a gorgeous aerial image requires patience, good conditions, and a lot of trial and error. Even a slight change in perspective will make a huge difference.

We’re not going to get too much into the safety in this article. We’ll instead look at how you can capture better drone nature photographs.

That being said, make sure to practice flying the drone before sending it up in public. You’ll also need to read up on local laws and regulations.

With that said, let’s jump straight into it:

#1 Use filters for your drone

I always thought that filters for drones were mostly used by videographers to keep the shutter speed for filming. Boy was I wrong…

Attaching a filter to your drone will give a huge boost to an image’s overall look. It’s the closest you’ll get to ‘instant improvement’.

You might be scratching your head right now wondering how filters for drones even work. Most likely you didn’t even know it was a thing!

It is… and they’re easy to use!

I’ve been using a filter kit for my DJI Mavic Pro 2 for several years now. The kit includes a UV Filter, Polarizer Filter, and the full range from 3-Stops to 10-Stops ND Filters.

It’s the Polarizer and brighter ND Filters I’ve found most useful for my own work.

Just like using a polarizer for your normal camera, using one for your drone will give the image a nice ‘pop’ in contrast and colors. It also does an excellent job removing glare, which is especially nice for daytime drone photography.

Using filtres requires a little more planning when using a drone. You can’t just put them on in mid-flight.

Luckily, attaching filters is pretty straightforward. For the DJI Mavic Pro 2, you simply twist and unlock the current lens protector, and replace it with a filter.

The exact steps depend on the drone. This should be well-explained in the filter’s instructions.

#2 The aperture makes a big difference

Several newer and more advanced photography drones now allow you to adjust the aperture. This is a big improvement that photographers should take note of.

You’re probably used to hearing that you should “always shoot f/11”. Forget about this when using a drone. It will often do more harm than good.

After testing the aperture performance of the DJI Mavic Pro, I’ve found that the ideal aperture is between f/2.8 to f/4.

Sharpness declines at f/5.6 and stepping down to f/11 results in a soft and almost out-of-focus looking image.

If using an aperture of f/2.8 results in too quick of a shutter speed I recommend that you attach a neutral density filter instead of narrowing the aperture.

A mistake I often see amongst beginning drone photographers is that they always fly the drone up to the maximum altitude.

I agree that it’s exciting to view the world from far up but the best images are often found closer to the ground.

In fact, sometimes you don’t need to fly more than a few meters above the ground. Take the image below as an example. The drone wasn’t hovering much above my head but it allowed me to get a perspective I couldn’t have otherwise.

Take a few minutes to explore the scenery at a lower altitude before flying straight up. You might be surprised to see that the most interesting compositions aren’t always when getting the ‘maximum altitude reached’ warning.

#4 Use ‘Tripod Mode’ for smoother movements in the air

Let’s get something straight: perspective is important in landscape and nature photography. This is amplified by 100% when photographing with a drone.

Finding this perspective can be quite challenging. Especially when the remote-control sticks are so sensitive. It’s easy to move the drone’s position too much.

That’s why I strongly recommend switching over to Tripod Mode when you’ve found an angle you like. This reduces the sensitivity of the sticks and allows for a smoother flight.

It’s initially made for videographers but it’s just as useful for photographers. Keep in mind that the drone is a lot slower in this mode. Therefore, you don’t want to turn it on before you’re at an altitude and angle you’re going to photograph from. This is just used for fine-tuning.

#5 Slow down and focus on the fundamentals

When I purchased my first drone back in 2015, I was so excited about photographing from this new perspective that I neglected several key ingredients of a good image.

Instead of paying attention to these important factors, I simply flew around like a madman. Up and down. Left and right. The drone was all over the place.

After the initial excitement settled down, I realized what I had been doing. None of the images I’d taken so far were noteworthy.

While I still find it exciting to fly a drone today, I have learned to slow down and focus on what builds a good photo.

Factors such as light and composition are just as important when photographing from above.

We’re past the initial awe of drone photography now, so, to create images that stand out, you need to remember the fundamentals.

#6 Tilt the camera down to find hidden patterns

The beauty of aerial photography is that what looks boring from where you stand can look stunning from above. There are so many “hidden gems” that can only be seen from a bird’s perspective.

That’s why many of the most fascinating drone images are captured with the lens facing straight down. Such as the image below:

One way to find these patterns is to fly your drone up to a high altitude and slowly rotate 360 degrees in search of interesting-looking landscapes nearby. If you do locate something, fly towards it, tilt the camera down and adjust the altitude until you’ve found something pleasing.

More often than not, it’s this angle that becomes the main interest when exploring new landscapes with a drone.

#7 Use Google Earth to plan your shots

The approach in the previous advice can be a nice way to find surprising sceneries but it includes a lot of trial and error. Most attempts won’t lead to good images.

That’s not an issue when you’re just out flying for fun. It’s more problematic, however, if you’re working on a specific project. In that case, planning helps.

Google Earth is a great (and free) resource for this. Simply plot in your location, zoom in and look around for interesting patterns or elements.

They might take some time to spot but you’ll be able to find locations you wouldn’t have otherwise.

I’m in the early phases of planning a future aerial-specific project as we speak, and Google Earth is essential in this process.

#8 Pay close attention to the wind

The downside of nature photography with a drone is that the weather dictates everything. Strong winds may put a stop to your plans before you even begin.

I’ve battled the weather more than once and I won’t lie and say that I won all those battles. I’ve lost or damaged more drones than I’d like to admit.

But that’s the risk you take when using a drone in the Arctic.

Drones have improved a lot during the past few years and newer models are more stable in wind than before. I’m actually surprised by what they tolerate.

However, the wind isn’t a factor that you should take lightly. I strongly recommend doing the following before flying off:

If both these tests go well, you’re good to fly. Keep in mind that the wind tends to be stronger in higher altitudes. So, if you’re unsure, wait and try again later.

#9 Don’t sleep on the shutter speed

This brings us to the next tip to improve your drone photography: adjust the shutter speed according to the conditions.

It’s not possible to get a razor-sharp image with a shutter speed of 0.5 seconds when flying in strong winds. The drone might fly well and even hang relatively stable but the stronger the winds, the quicker the shutter speed needs to be.

Make it a habit to always look at the image preview when adjusting the settings. You don’t want to come home and realize that all your great images are blurry because you didn’t adjust the shutter speed.

#10 Get out as much as possible

My final tip to become a better drone photographer is to get out as much as possible. The more time you spend flying and photographing with the drone, the more likely it is you get good images.

If you’ve got a local area to fly around you should use this to your advantage. Explore it in different lights and conditions. The photos will be different and you’ll become more comfortable operating the drone.

You won’t become a better photographer if you’re not out taking images.

Drone photography can bring out a lot of emotions in us. It’s exciting. It’s scary. It’s fun and it’s frustrating.

Learning to operate both the drone and its camera takes some time but the opportunities found from this new perspective are enormous.

Keep these 10 tips in the back of your mind next time you head out with your drone.

It goes without saying that you don’t need to apply all of them at once; everything depends on the scenario. However, these tips will help improve not only the image quality but also the visual impact of your photos.

Have you done any drone nature photography? Share your favorite images with us in a comment below!

Here are some more articles about drone photography that you might find useful: 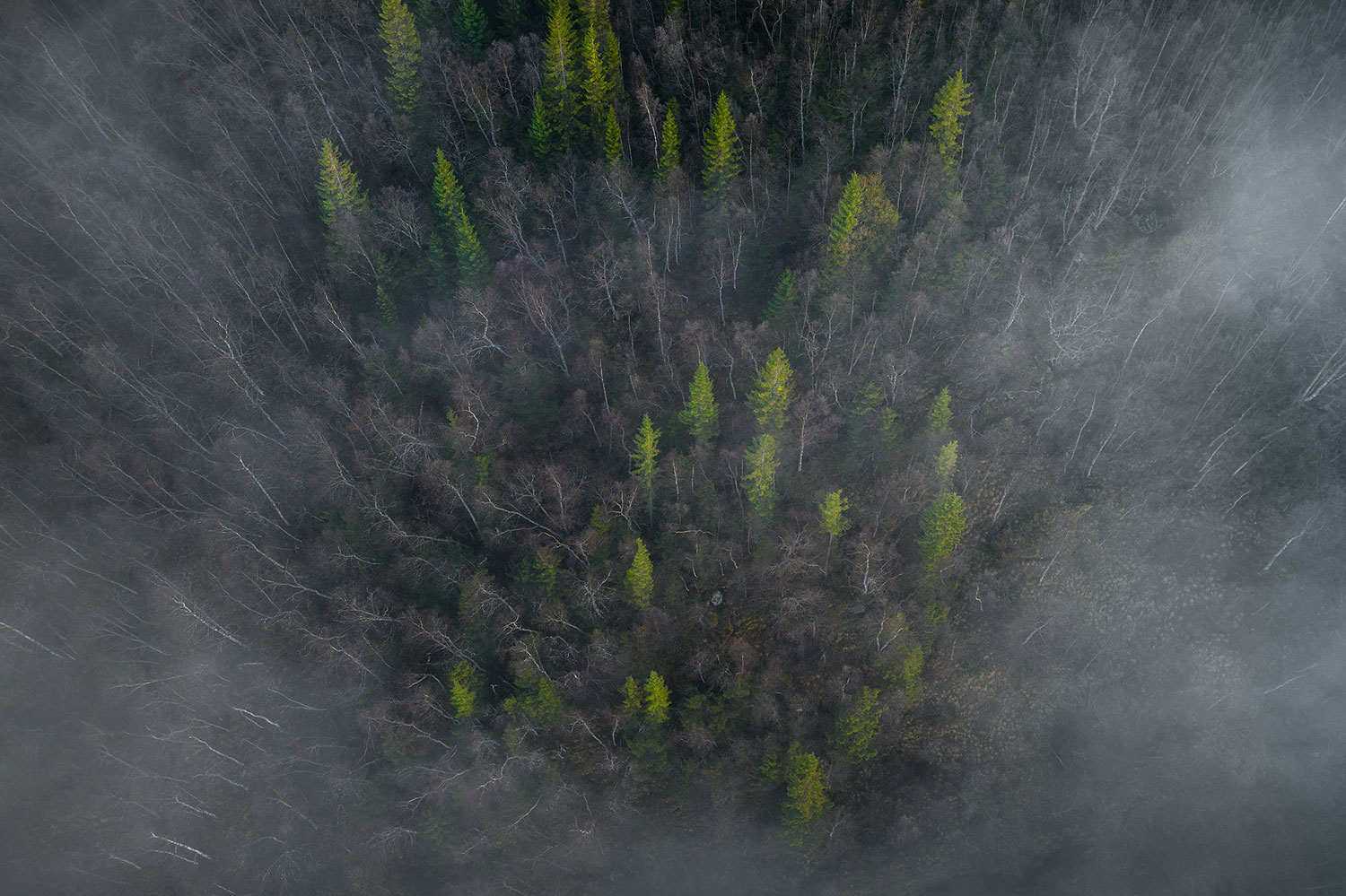 Leaving the Tripod Behind? Read These Tips for Handheld Landscape Photography

5 Different Tips to Improve Your Photography 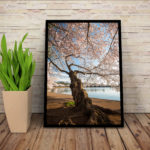