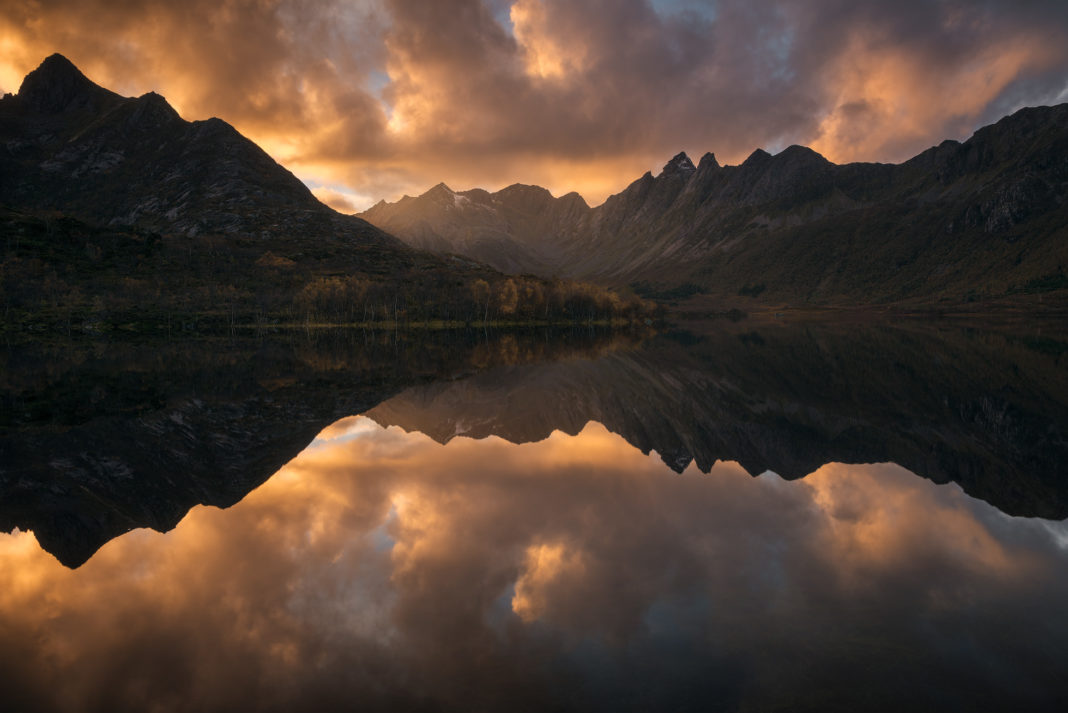 The Lofoten Islands in Northern Norway have become one of the most sought after destinations for landscape photographers and it’s not hard to understand why: rugged peaks projecting hundreds of meters straight up from the ocean, never-ending sunlight in the summer and northern lights in the winter.

These factors, amongst many others, are why more than a million tourists visit the archipelago each year. Perhaps it’s fair to say that Lofoten is high on your bucket list as well?

The Lofoten Islands are situated north of the Arctic Circle (more specifically at 68 degrees north). It then shouldn’t come as a surprise that photographing here comes with a few more challenges than a lot of other areas. Without planning and preparing properly, your visit to the islands might end up memorable for all the wrong reasons, and you return home without any noteworthy images.

Don’t let that worry you, though. The Lofoten Islands are a landscape photographer’s paradise and there’s an abundance of amazing shots waiting for you.

#1 Be aware of the differences between seasons

There’s one thing that I’ve seen too often during the years I’ve been living and guiding photography tours in the Lofoten Islands: many visiting photographers come completely unprepared for the season.

It’s easy to forget that the archipelago is situated in the Arctic. This means that the weather can be unforgiving and often changes in a matter of minutes. The storms are brutal and sometimes close off roads for hours or days.

Temperatures in winter aren’t as low as other areas of Norway but, combined with the wind, it’s far from pleasant if you’re not wearing proper outdoor clothing. A pair of jeans, sneakers and thin jacket is not suitable, especially not if you plan to emerge yourself in the elements while photographing.

Not only is it important to bring the right clothes but you also need to be aware of the differences between seasons.

The Polar Night is a phenomenon that occurs in the months of December and January. During this period, the sun doesn’t rise above the horizon. The dark days mean that you’ve got a limited time of photographing (though the light can be exceptional). On the flip side, it’s a great time for photographing the Northern Lights!

During summer months another phenomenon occurs: the midnight sun. During this period, the sun never sets. Yes, that means 24-hours of light! This means you’ve got plenty of time to photograph (the sun is low on the horizon from around 11 pm to 2 am). Keep in mind that the bright nights means there are no visible stars and you’re not going to see any northern lights.

I only recommend renting a car and driving on the winter roads if you’re used to driving in such conditions. The roads are not for the faint of heart!

#2 Be ready for changing weather conditions

The weather forecast tends to be quite accurate here in the Lofoten Islands but it’s not uncommon that it hits a miss. Big time.

It’s important to always be prepared for a change in weather, as it can happen in a matter of minutes. For that reason it’s essential to bring an extra layer of clothes – especially when going for a hike.

We might not be spoiled with colorful sunsets here but the quickly changing weather gives plenty of opportunities for photographers. Just imagine, you can get quite different shots of the same location within just one hour of shooting.

So, make the most out of the time you got. Don’t leave a location just because the rain is coming in or the conditions aren’t perfect. It might not be long before it changes again.

It’s also worth mentioning that a partly cloudy sky doesn’t mean there’s zero chance for seeing the Northern Lights in winter. Clouds moving quickly may result in big enough gaps in the sky to see and photograph a nice display of the ‘Lady in Green’.

The Lofoten Islands cover a big area and the narrow roads going around the fjords means you got to expect a fair amount of time driving around. Therefor, it’s important to choose an accommodation that’s centrally based.

Before moving to the islands, I always preferred staying at the beautiful Hattvika Lodge (which is my absolute favorite accommodation in Lofoten!). Located within a 1-hour drive of all the ‘must-see’ photographic locations, it’s the perfect base to have. Enjoying some downtime in the sauna after a long day exploring doesn’t feel too bad either…

I recommend writing down all the locations you want to visit and plotting them onto a map. That will give you a good idea of where it would make sense to stay. Choosing the right place saves you a lot of time driving (and gives you a little extra sleep in the mornings…)

I’ll be honest with you. Having a backup camera when visiting the Lofoten Islands will potentially save you a lot of trouble. I learned that the hard way.

As you now know, the weather and conditions can be brutal and it’s not uncommon for cameras to end up in the ocean, smashed against the rocks, or simply malfunction. The risk of something happening to the camera increases when you emerge in the elements to capture the best possible angles.

I’ve been unlucky to have a camera and lens go for an unintentional swim in the ocean and at the time I didn’t have a spare camera. Luckily I was able to borrow one from a friend until my replacement arrived two days later.

It doesn’t matter if you’re a hobby photographer or a full-time professional; I strongly recommend having some sort of backup option available. You most likely won’t break your camera but it’s always good to have a backup just in case something happens.

Most of the must-see photography locations of the Lofoten Islands are situated along the coastsline. Combining that with strong winds and rain, it’s fair to say there’s going to be a lot of dirt finding its way to the front of your lens.

The microfiber cloth is going to be your best friend and potentially what saves an image. I recommend having a minimum of three cloths as well as a handful of pre-moistened lens wipes.

This is an inexpensive accessory that requires next to no space so there’s really no excuse to not have one in your backpack or jacket at all times.

I’ve already talked a fair bit about the weather conditions in the Lofoten Islands but it’s not without a reason. It’s such an important factor when photographing here that it’s important to be aware of.

What far too many photographers fail to do, however, is to embrace the ‘bad’ weather. It’s exactly this stormy weather that is so characteristic of this region. So why not be out there photographing it?

It might be more tempting to spend the day inside a warm and cozy cabin when a storm is taking place outside but there are plenty of photographic opportunities in this weather. You just need to be out there, ready to capture them. Keep in mind that the weather changes quickly so you might suddenly be rewarded with a few minutes of magnificent light!

My second to last tip for photographing the Lofoten Islands is to bring enough spare batteries!

First of all, you’re going to be taking a lot of pictures. The scenery is majestic and there are new photographic opportunities awaiting around every corner, so don’t expect the camera to be turned off a lot.

If you’re like me and use Live View for composing images, you know that the battery duration is considerably shortened.

Being on the road all day means you don’t always have time to fully charge batteries so it’s useful to have several extra batteries in the car or backpack. It would be silly to miss out on great shots due to no batteries, right? (Don’t worry – we’ve all done it!)

Batteries also drain quicker if you’re lucky enough to photograph the Northern Lights. As the temperatures drop, so does the battery duration. A good tip for photographing the Lofoten Islands in winter is to keep a spare battery in your inner pocket. Keeping the battery slightly warmer helps increase its duration.

An alternative is to purchase a car charger that you can use while driving between locations. It probably won’t fully charge the battery in that short time but it’s better than nothing.

#8 Explore beyond the hotspots

I’ve hear photographers saying that the Lofoten Islands is over-photographed. This couldn’t be further from the truth! It doesn’t take much exploration to find unique perspectives or locations that you’ll have for yourself.

While you should visit and photograph the popular photographic locations, I recommend that you also set aside time to explore further. Go driving in daytime and see what you find. Perhaps you see a mountain that interests you, why not hike up to it or in the area around?

There’s definitely been an increase in photographers and tourists visiting Lofoten but I still spend the majority of my outings without meeting another photographer.

Are you planning to visit and photograph the Lofoten Islands but would like some local guidance? Contact me for more information about private or group workshops and photo tours. 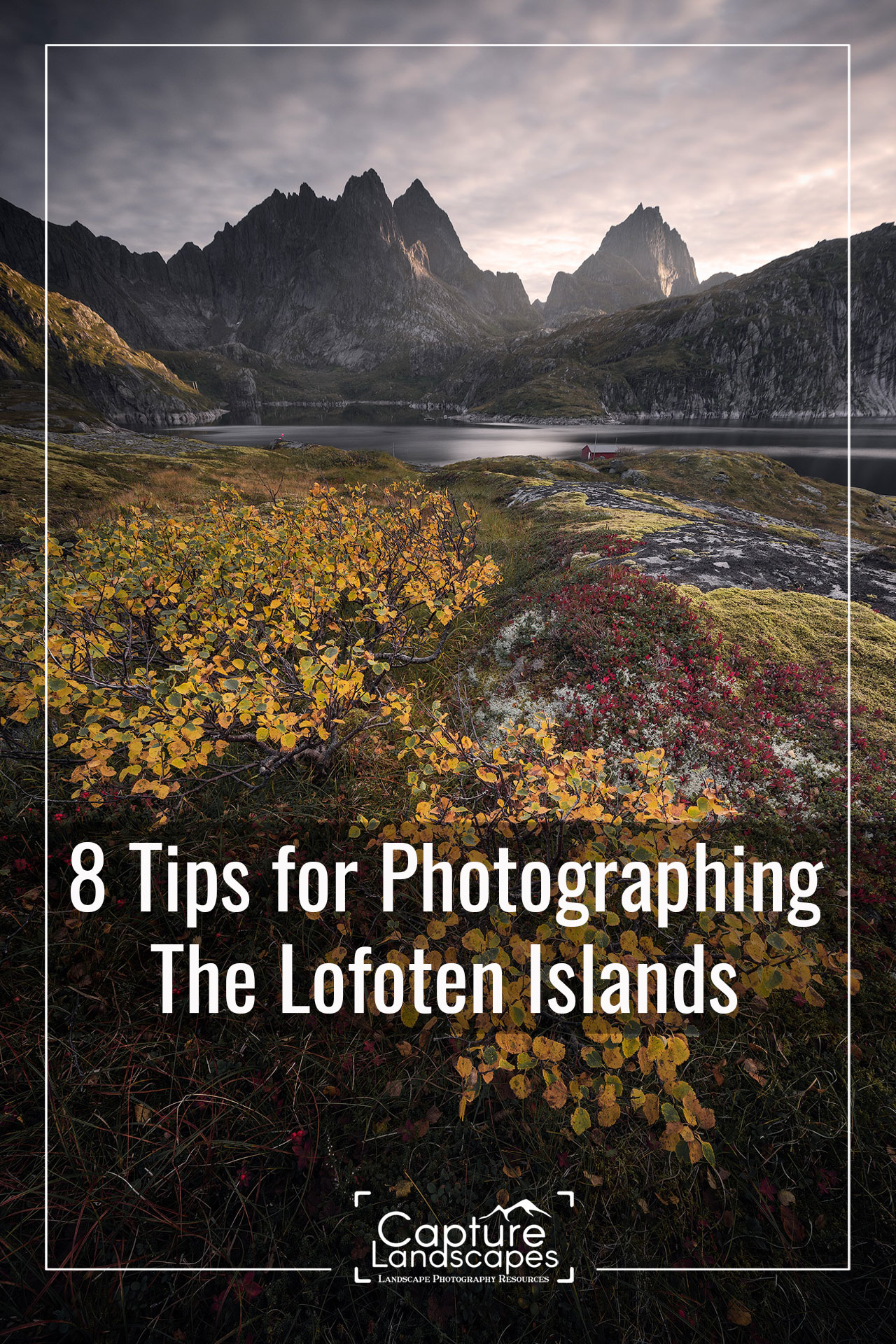