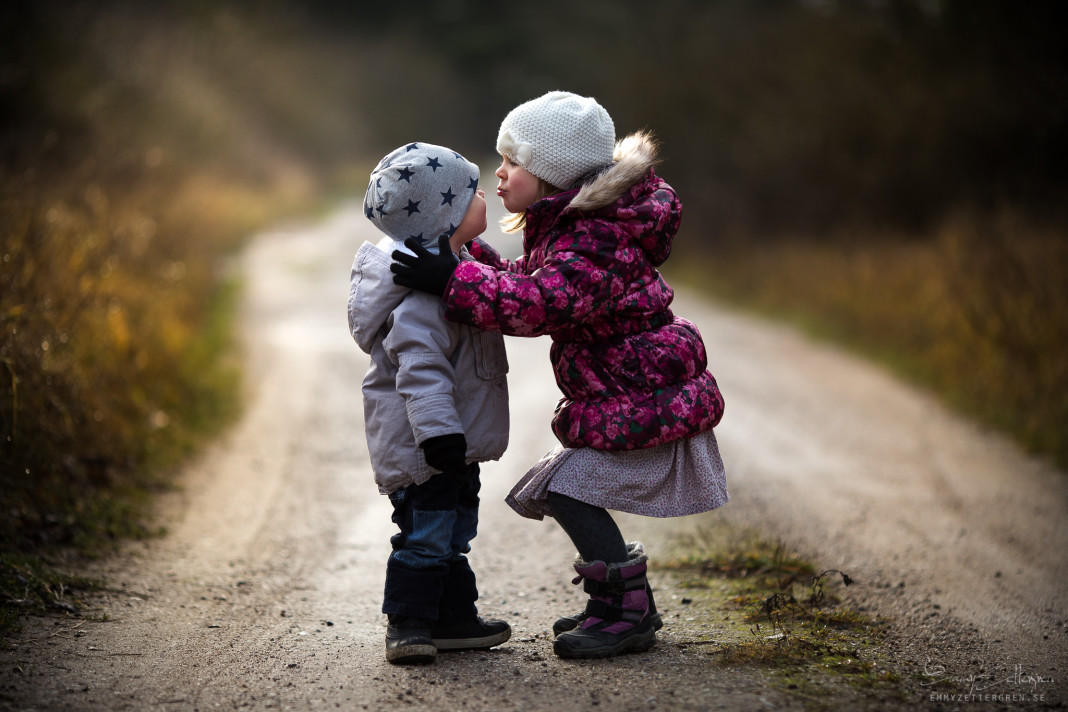 Capturing children in photos has mostly been easy for me, probably because I have two of my own and they’ve endured me taking tens of thousands of photos of them.
However, children being children, they can still present quite a challenge when it comes to taking their picture which is why I’ve had to work a lot on both my technique and my persuasion skills. Lacking either will get you really awkward photos, or just plain bad ones.
Since I don’t have access to a studio, I’ve learned to work outside which really has both benefits and drawbacks. The light for instance; I try to shoot when it’s a bit dimmed, like in the mornings or the afternoons. That’s when the magic yellow light presents itself and I find the intensity of the image is much more profound. The drawback here being the limited time of day available for shooting.

Another thing is the seasons; Living in Sweden the seasons have really different characteristics and I really have to adapt to bring out the special in each one. Summer and flowers are nice, but it’s just a small piece of the whole year. Each season has it’s charm and I find that as long as you can get the children to interact with their surroundings no matter the season, the possibilities are endless. 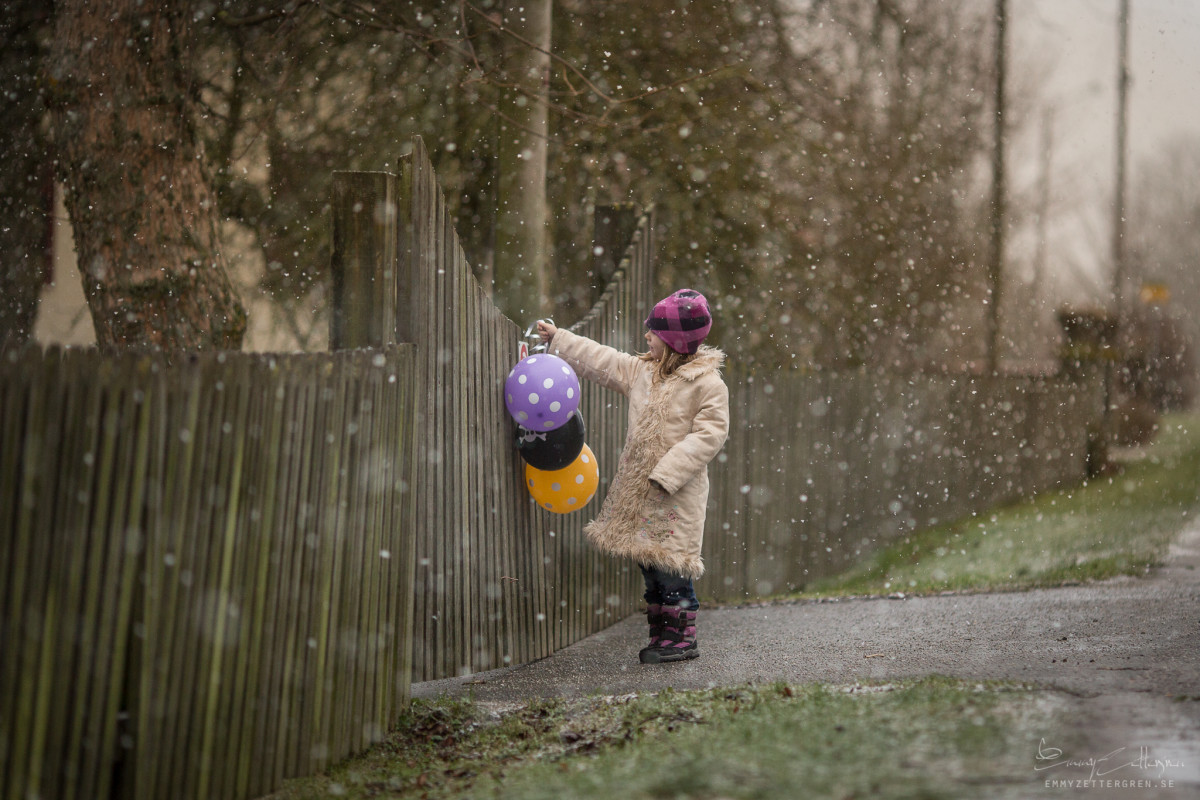 If you’ve ever tried photographing a child that’s unaware of you doing so, odds are you won’t tell them next time either since it’s usually so much easier. That’s also why I try to activate them with something so they spend less time thinking about me and more about what they’re currently playing with or doing. The older the child, the harder it is to get that natural feeling into the photo since they become more self-aware and they want to have the photo taken their way. So sometimes I let them direct and act as they see fit and once they’re happy I urge them to go play or do something else a while and usually that’s when the magic happens. They resume their games and do what they want to, while I observe and just capture the moments as they arise. I might call their name for a look or to get the angle of a face that I want to capture and since they’re playing and doing what they want, their smiles are almost always genuine.

Speaking of angles, I’ve found it helpful to stay on the children’s level. They’re tiny people and while I’m by no means a tall person, by their standards I’m a giant. So to bring a more interesting perspective to the photo, drop down on the ground and either lay down, sit or squat. Talk to them, show them things they might find interesting in the vicinity or bring things for them to play with that you believe should be in the photos. I think toys and other accessories almost always offer an advantage over not having them, since they both keep the children busy and you can position them and the children in the photo the way you like.

A trick I often use when I photograph my own daughter, and I’m looking for that dreamy feeling, is asking her if she can see any birds flying above us or above me. That usually keeps her focused and almost immobile for a few seconds, giving me ample of opportunities to capture some nice expressions and gazes. 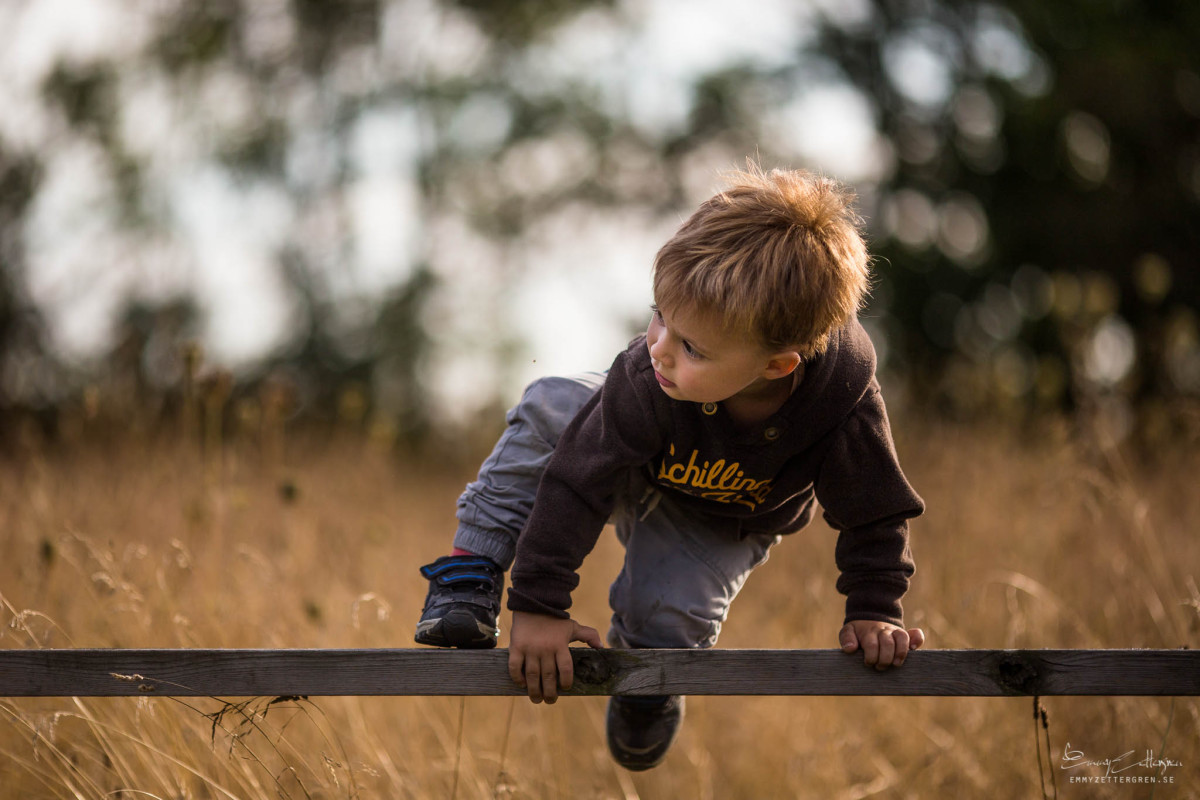 If you’re more into clean portraits and you’re working with smaller children you can always ask them to look for something inside the camera that they’re especially fond of, like “Can you see an elephant in the camera?”. That usually offers a few seconds to capture an intense gaze. Older children might have a hard time relaxing and an easy trick that often works is asking them which word they believe is the funniest (or worst) word of them all, have them say it out loud and also instructing them that under no circumstances are they allowed to laugh! That will almost always make them laugh.

The most important piece of advice here is just to be creative and try to get a feeling of what works with this particular child. They’re all different and while some are easy to deal with and will see you finished in 5 minutes, others require a little more time and determination before you’re done.
I recall a photoshoot with a two year old girl who was not in the mood for anything, let alone me and my camera. I tried a lot of things that day, but in the end what broke her spell of annoyance was me throwing a teddy bear into the air and having it land on my head. She softened up almost immediately and she started both laughing at me and throwing her own teddy around. With some creativity we produced some absolutely stunning autumn-pictures that day. 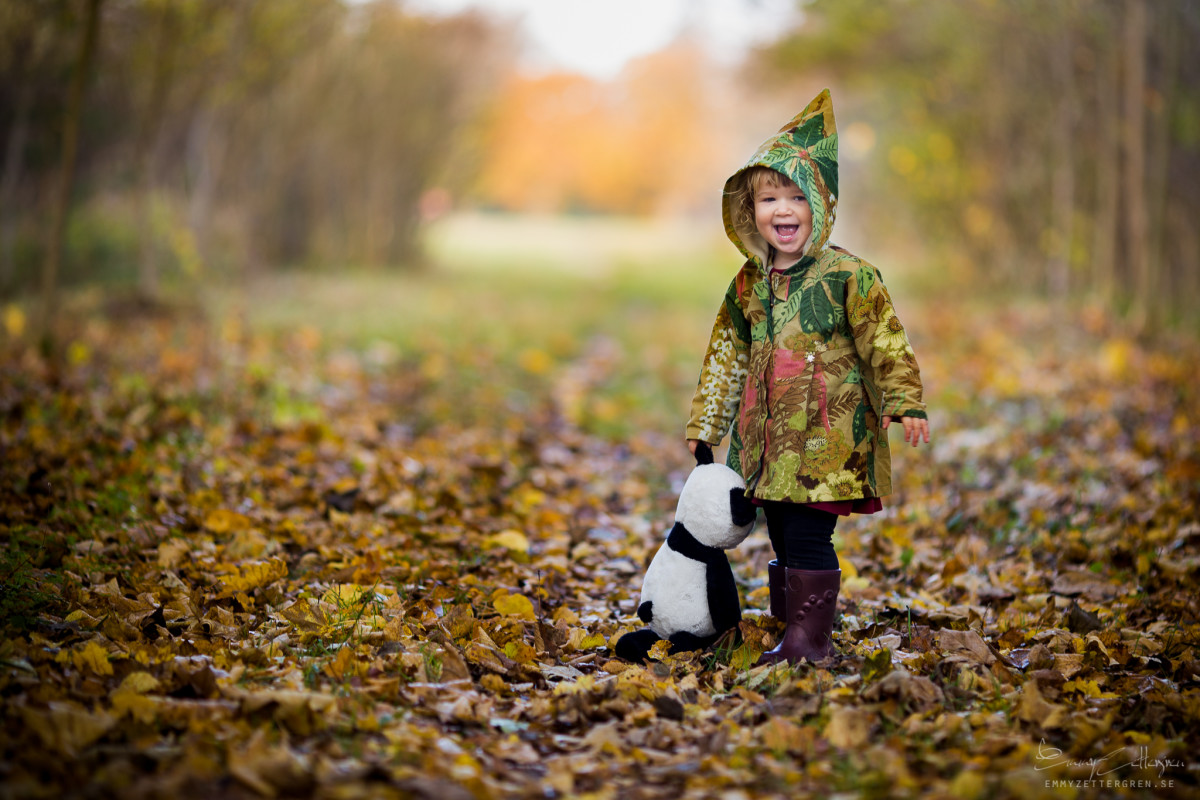 Looking over the specs of my gear I usually sport a Canon 6D along with a Canon 135mm f/2.0. I use a fast shutter speed to make sure their movements don’t blur but also as big an aperture as possible since I like the contrast between the child and the fuzzy background. To achieve this effect, you need some distance between the child and the background. The more distance, the fuzzier background. Using a telephoto lens helps as well and while 135mm is my personal favourite, a similar effect can be achieved using both 85mm and 200mm or similar. A lens at 50mm is perfect for changing it up a bit with closer portraits and sometimes to capture more of the surroundings if that makes sense at the time.

But really, in the end only two things limit what you can achieve; your very own imagination and the child’s patience. And having said that, some days you won’t be able to produce something good. If you catch a child on a bad day you may very well end up getting nothing despite having a childs imagination of your own. Just be patient, do your best and if it crashes and burns, there’s always tomorrow.

Children usually tire rather quick as well. My sessions with small children rarely extends past the 30 minute mark. Pushing past 30 minutes tends to not make a difference result wise since when they’re tired, they refuse to follow instructions and their focus is somewhere else. So, be effective with the little time you have, come prepared with ideas, accessories, toys, knowledge of the locations points of interests and you will be rewarded in kind with some of the funniest and cutest motives you can possibly capture. 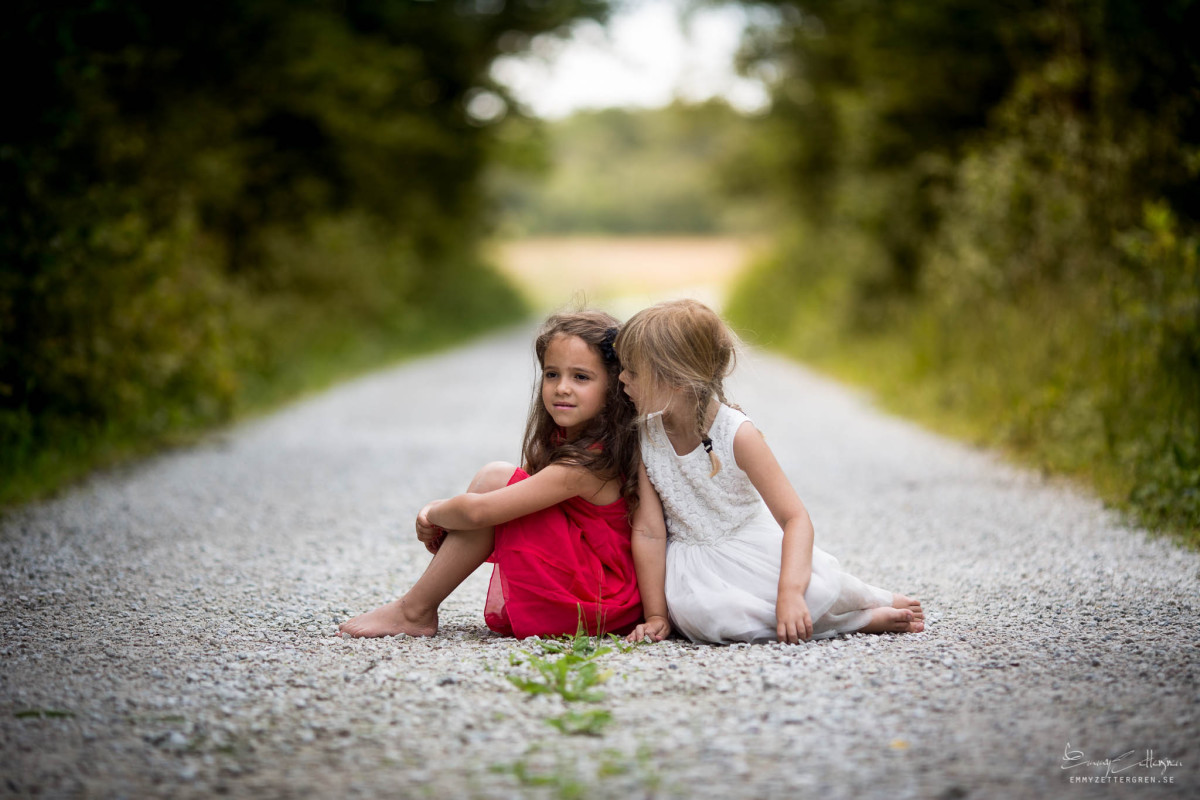 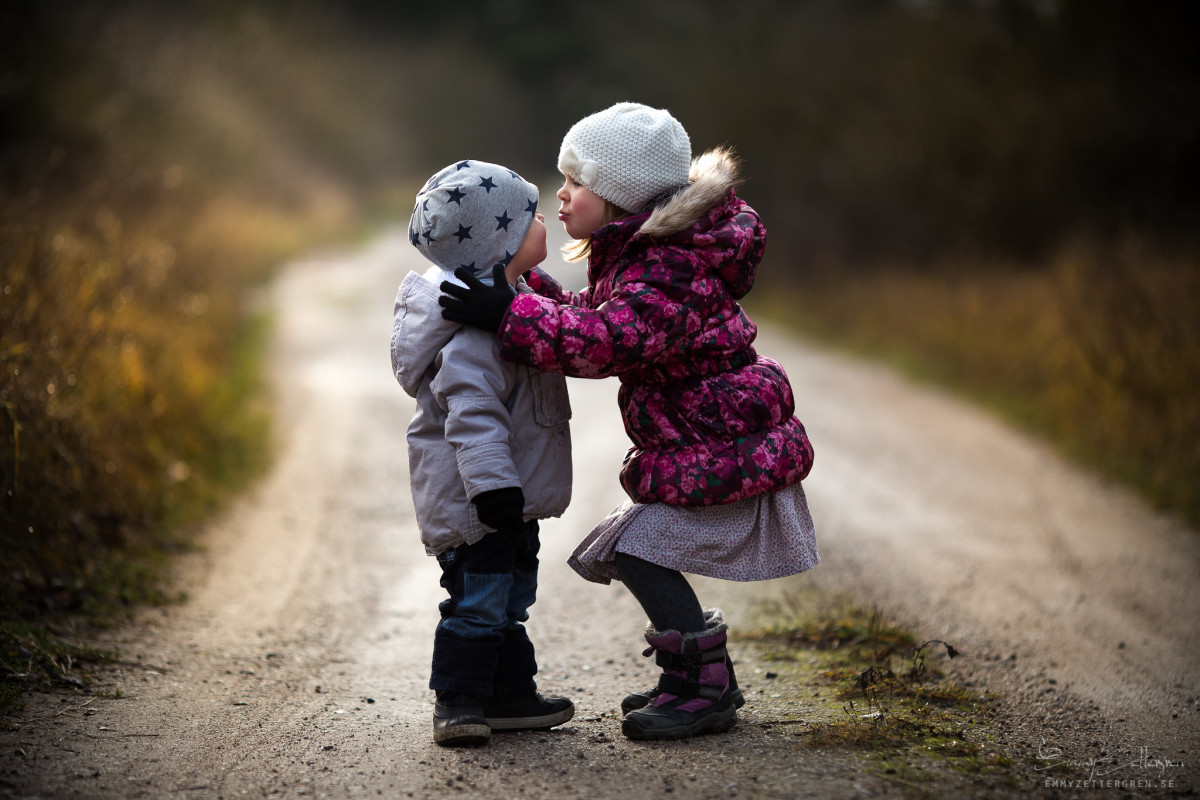